1. Everything is and Object: Inheritance and the Prototype Chain

The inheritance in javaScript depends on “Prototype” property.

The first way is to define all properties and functions in constructor:

The alternative way is to use prototype property:

3. The Prototype Chain in the Console

In console, if we type in ‘john’, we can see the john object gets printed. 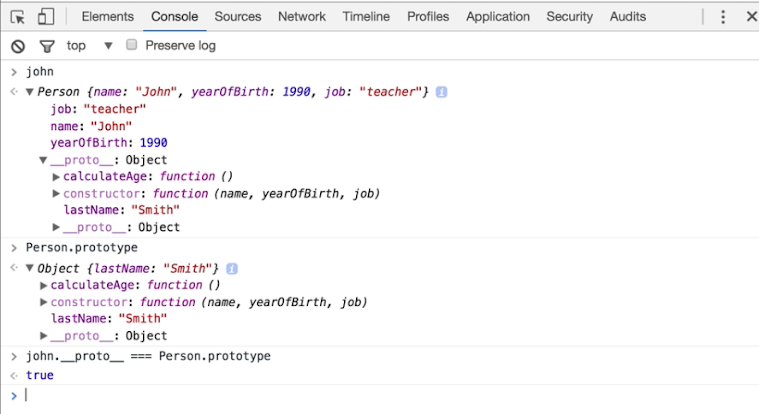 From the above screenshot, we can see Person’s prototype is an Object, and also 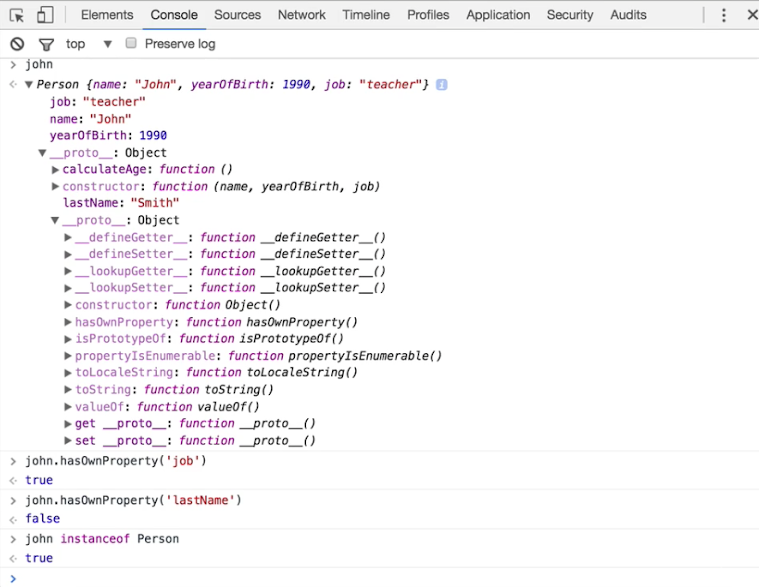 From the second screenshot, we can see that because of the inheritance, the john object can call hasOwnProperty method. Obviously, job is john’s own property, but lastName is not.

Another method to know is instanceof, we can know john is an instance of Person object.

By typing console.info(x), we can see this array object. If you click on the proto, you can see all methods available in array. 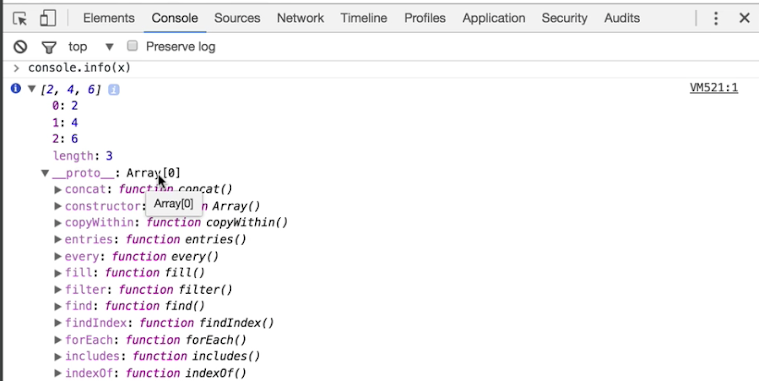 Object.create builds an object that inherits directly from the one that we passed into the firs argument.

While, on the other hand, the function constructor, the newly created object inherits from constructor’s prototype property.

Actually, one of the biggest benefits of object.create is that it allows us to implement a really complex inheritance structures in an easier way, because it allows us to directly specify which object should be a prototype.

Read more: Understanding the difference between Object.create() and new SomeFunction()

Variables containing primitives actually hold that data inside of the variable itself.

However, variables associated with objects do not actually contain the object, but instead, they contain a reference to the place in memory where the object is stored.

So again, a variable declared as an object does not have a real copy of the object, it just points to that object.

In console, we can see the print out as follows

It shows that actually obj1 and obj2 are pointing to the same object, once obj1.age gets changed, it reflects to obj2.age as well.

When we pass a primitive into a function, a simple copy is created. You can change a as much as you want, but it will never affect the variable on the outside.

For the object, instead of passing the object to the function, we just pass in a reference.

6.1. Functions are Also Objects in JavaScript

Because of all above, we say that in JavaScript, we have First-Class Functions.

Functions can also be returned from functions.

Here we use a silly game to demonstrate how IIFE works,

IIFE can only be called once and has the advantage of data privacy, because unlike defining a function and assigning it to a variable, IIFE can not be reused elsewhere.

11. Code Challenge： Build a Fun Quiz Game in the Console